TfL has this week published its most radical plans yet for redesigning some streets in central London to give cyclists safe, protected space for cycling. The two routes intersect at Blackfriars; one will run from Kings Cross down to Elephant and Castle, the other from Tower Hill across to Acton.

Both routes are largely segregated, and junctions give priority to cyclists. They pass close to many of London's top attractions, and also include improvements to improve the general environment, and help pedestrians.

But these improvements come at a cost, not only financial, but in terms of reallocating space from motorised traffic. There will no doubt be objections from those who would prefer to keep the status quo.

Please take time to review both sets of proposals, and send a supportive response in to the consultations.

Neither plan is perfect, and there may be areas where you'd like the plans to be improved, but they are better than anything seen before, and need our support to get them approved.

Three things strike me as of special importance for Boris bikers:
Please reply to the consultations, and help make cycling in London better for everyone.


City University students have presented their findings on improving Boris bikes, including integration with Oyster, upgraded docking stations, and better access to information. The article is worth reading, though several of the recommendations sound expensive. Vending machines for bike equipment sound positively impractical.

Last week we had the news that Boris bikes would be 'going electric', though the truth is not quite what the headline indicates. This would be a separate system for hiring electric bikes in north London, which would not be integrated with Barclays cycle hire. I wish the scheme good luck, as long as it doesn't draw funding away from the improvements and extensions which the Boris bike scheme still needs.

The extended Superhighway 2 has opened, prompting a flurry of new policy announcements from the Mayor. However, there are no docking stations along the new segregated section. A glimmer of light is that Boris has promised the existing section from Aldgate to Bow (where there is no shortage of Boris bikes) will be upgraded with better junctions and more segregation.

And back to the southwest extension, the first 14 docking stations in Hammersmith and Fulham are ready to go in December, it is reported.
In April 2012 cycle hire went live across the whole borough of Tower Hamlets in the first major extension of the Boris bike scheme. Tower Hamlets is a borough of great contrasts, with huge diversity, areas of poverty, and of course the headquarters of Barclays, the main sponsors of the bikes.

Story so far: At launch only the western margins of the borough had docks, such as at Wapping High Street and Leman Street. Quickly it was announced that the first extension would cover the whole borough, including the affluent Canary Wharf area, home of Barclays. With two superhighways (2 and 3) in the borough, you might have thought it a recipe for success, but CS2 in particular has been widely criticised, and cycling infrastructure in the borough isn't quite as good as it could be. There are also notable gaps - why no docks in riverside Limehouse, or on Westferry Road? The closeness of the bikes to Greenwich have led to some interesting excursions, but it will be a long time before we see docks on that side of the river.

Coming soon: Tower Hamlets is more or less a done deal, though I know of one new station at the eastern end of Old Ford Road, close to the Olympic Park, which has also raised objections from locals. News of others would be welcome!

The future? A real opportunity for Tower Hamlets would arise if the bikes are extended to the Olympic Park. It would also be great if some of the gaps in the borough could be closed. Extension of the bikes north of Victoria Park could in future help the cycling culture there, and more docks are definitely needed at the western end of CS3. 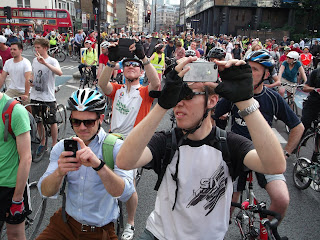 1,500 cyclists took to the streets in a respectful protest on Friday evening in memory of Philippine de Gerin-Ricard, killed on CS2 close to Aldgate. I attended along with several other Boris bikers. Philippine was using a hire cycle at the time of her death.

London's streets must be made safer for all cyclists, from the fastest and most experienced to those who are just taking to two wheels. We must emulate Holland and other countries where cycling is a safe activity for the majority. I join with others in asking the Mayor to make sure CS2 and other superhighways are upgraded to the safest standards so that there will be no other needless casualties on London's roads. 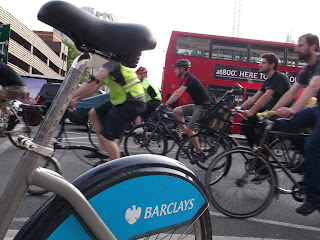 We note with sadness the death of Philippine De Gerin-Ricard, a French student aged 20 who died in a collision with an HGV close to Aldgate on 'Superhighway' 2. She was a regular Boris biker. This stretch of superhighway has been widely criticised for mixing cyclists with aggressive motor traffic, the only evidence of any 'superness' being some blue paint on the road.

This Friday LCC have organised a flashride from Tower Hill to Aldgate, starting at 6.15pm. I will be there. The ride will pause at the site of Philippine's death as a mark of respect. TfL and the Mayor must hear our plea that no more casualties on London's roads should be allowed by a failure to tackle the conflict on our streets. CS2 should be totally overhauled to separate traffic from cycles, upgrading the design to the far better solutions proposed in Stratford for the extension of this same highway. And the City of London needs better plans to keep cyclists safe in Aldgate, where the removal of the gyratory gives an opportunity to change the culture in this area into one where urban space is calmed by being made available to pedestrians and cycles, rather than cars. The current proposals do not go far enough. Please join me on Friday.

Boris bikes are costing taxpayers money. Not a new story but one which will increase pressure for a better sponsorship deal than the one with Barclays. I agree with Jenny Jones, that in its current shape the scheme is not ambitious enough to encourage the levels of cycling needed to make it sustainable.

And if you live in Wandsworth, all the sites are now confirmed for the extension this autumn/winter.

Some of the new docks are starting to go in at last. I've personally seen a site marked off on Holland Park Avenue, and installation is underway at Archbishops Park. News of more sightings would be welcome!

Boris Bikes is a free independent community forum and in no way associated with Transport for London or Barclays plc.